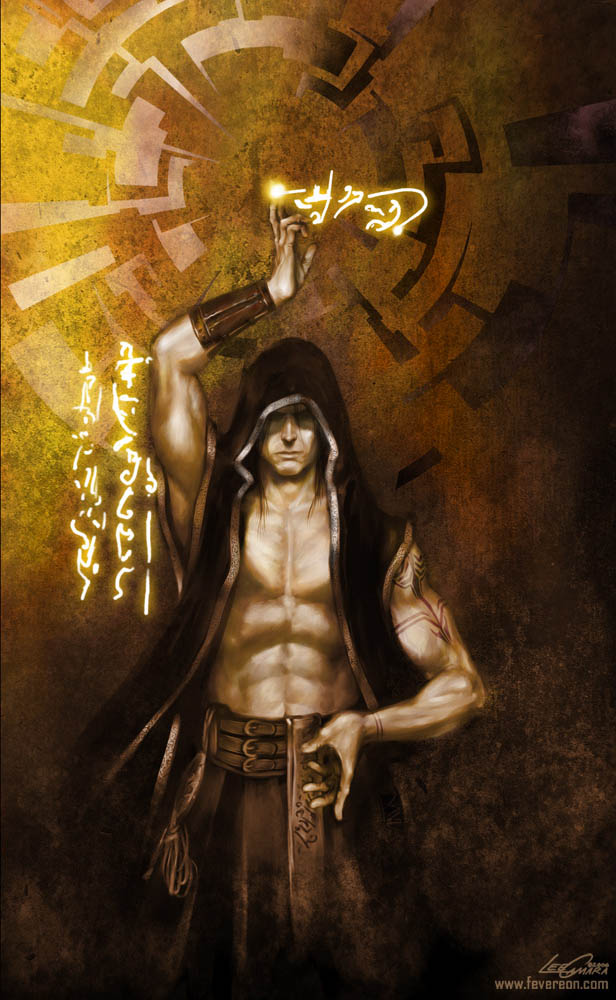 With the fall of the Glorious Empire, many arcane secrets were lost. Over time, arcane sages, historians, and archaeologists have begun to piece together a pale understanding of these lost techniques. The School of Glyphcasting is a resurrected arcane tradition that utilizes pieces of the Glorious Empire's knowledge, tying arcane energies to mysterious symbols that hold spells in place.

Ciphers, as practitioners of Glyphcasting call themselves, are secretive and thirst for knowledge. Their symbols literally contain power and only those who dedicate themselves to this lost art can be entrusted with its secrets.

Cipher Savant
Beginning when you select this school at 2nd level, the gold and time you must spend to create a spell scroll is halved. (page 128-129, Dungeon Master's Guide)

Spell Anchoring
Starting at 2nd level, a Cipher has learned the fundamental technique of anchoring a spell to a glyph, which allows them to store the arcane energy in the symbol for releasing at a later point. Creating a spell anchor takes one minute, during which time a small glowing glyph is applied to an object or creature no larger than 10 feet in diameter. Some ciphers use inks or paints to create glyphs, while others simply trace them out with their fingers, drawing the patterns with arcane energy. Immediately after the glyph is created, the Cipher must cast the spell they wish to anchor to the glyph. The spell is cast but the effects do not happen immediately; the spell is instead anchored to the glyph and can be released at a later time. When the Cipher takes a long rest, all existing spell anchors fade away and the Cipher may have a maximum number of active glyphs equal to half their wizard level, rounded down.

Example: A Cipher creates a spell anchor glyph and anchors the spell Protection from Good and Evil into a glyph on an amulet. Since Protection from Good and Evil is a spell with a range of Touch, it will target a person wearing the glyphed amulet, but if the amulet is resting on a table when the anchor is triggered, the spell will fail, since it has nothing to apply to. If a Cipher had stored See Invisibility in the same glyphed amulet, which is a spell with a range of Self, the Cipher herself would need to be wearing the amulet, or the triggered spell would fail due to a lack of an applicable target.

Because the anchored spell is technically cast when the glyph is created, not when it is triggered, triggering an anchored spell does not count against the standard limitation of one non-cantrip spell cast per turn (page 202, Players Handbook). However, triggering an anchored spell in a glyph and casting a spell within the same turn carries risks, because the amount of arcane energy being channeled can become difficult to control. When a Cipher casts a spell and triggers an anchored spell glyph in the same turn, they must make a Constitution saving throw with a DC equal to 8 + the combined spell levels of the two spells, called an arcane backlash save.

Arcane Mishap: An arcane mishap is a harmless, but possibly annoying or embarrassing, mystical effect that typically applies to the caster, but on rare occasions may target another creature in the vicinity. Most arcane mishaps are purely cosmetic and have no mechanical effect, but last until the afflicted individual completes a long rest. Examples of these could be the afflicted individual's skin color changing to a bright pastel hue, or an illusion of a storm cloud hanging persistently above their head. Occasionally, an arcane mishap could be powerful enough to cause some skill checks to be at a disadvantage, but effects of this variety only last 1d4 hours. For instance, glowing motes of light surrounding the afflicted individual's head could cause their Stealth checks to be at disadvantage. Or a distracting chime that sounds every time they tell even the tiniest white lie would make Deception checks at disadvantage. The DM is encouraged to be creative with arcane mishaps, but while they might hurt the caster's pride or create a comical situation, they should not be harmful or more than a small nuisance.

Arcane Overload: When the caster fails their arcane backlash save, wild and uncontrolled arcane energy escapes from the casting. Sometimes the Cipher is able to contain this raw arcane energy within themselves, which is referred to as arcane overload. The Cipher immediately takes 1d6 lightning damage, plus an additional 1d6 lightning damage for each spell level of the higher level spell cast this turn. The Cipher's body is lashed with violent and colorful arcane energy that quickly fades as it burns through them.

Master Glyphs
At 14th level, you add the spell symbol to your spellbook, if it is not there already. This spell is automatically always prepared for you and does not count toward your prepared spell limit. Additionally, you may have one active symbol that does not require a material component to cast. Any additionally active symbols beyond the first require the necessary material components to create. When you have no active symbols, you may use this ability again.

Though all wizards lament the lack of time in one's life, daring are the wizards who utilize arcane secrets to actually challenge the inviolable laws of time. Chronomancers, as they are known, do not focus on a single school of magic, but instead apply

Update: It's been almost a year, exactly, since I published this post. And the For Science Crew has been playing together for over a year. So I figured it was about time to take a new look at Khet's playlist and revise it. Recently,