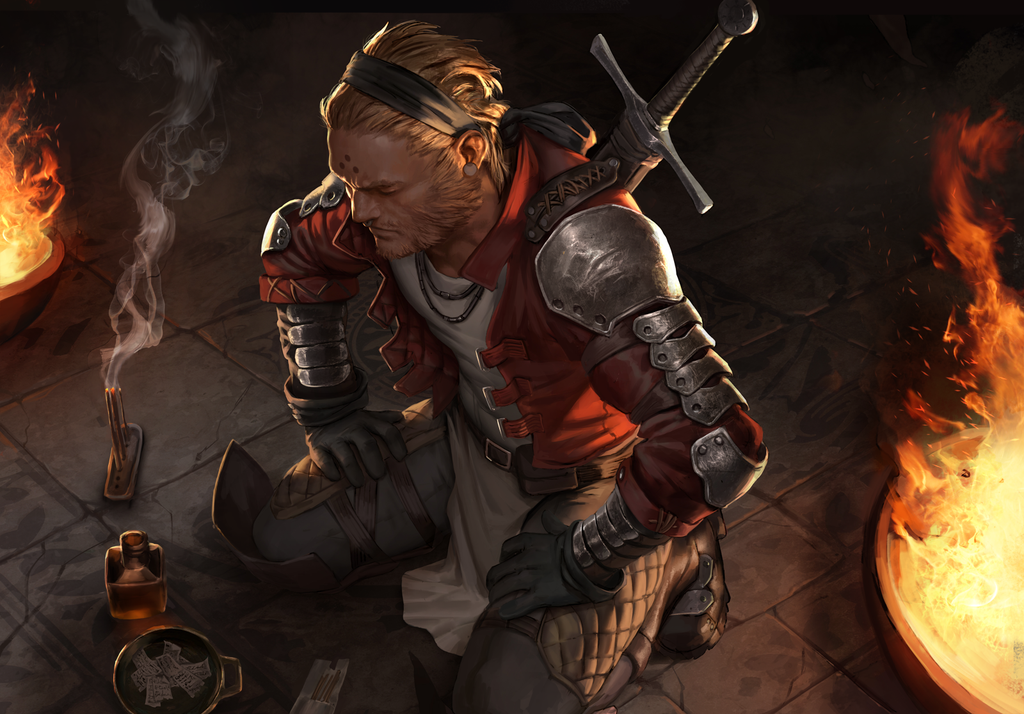 The Oath of Secrets is a vow to protect the world from dangerous magic, often by seeking it out and keeping it out of the hands of those who would use it. Most paladins who commit to this oath are members of secret orders, and while these orders may aid the paladin, their numbers are often few and they face nearly insurmountable challenges in their mission. Many of these orders have been in existence for centuries or longer, quietly protecting the world from unknown mystical threats. Paladins of this oath often adorn their armor and clothing in protective charms and symbols, but otherwise equip themselves practically, for their commitment often takes them to ancient tombs, derelict ruins, or lost towers of magic.

Tenets of the Secret Orders
Not every paladin of this oath is a member of a still-existing order, but all share tenants preserved and passed down by these orders.

Uncover Knowledge To protect the world from dangers of magic, first you must know of their existence. Travel to the forgotten places and find what remains of ancient and mystical secrets.
Keep the Secrets Dangerous magic tempts those of weak will. You must know the danger that could be, but it must remain unknown to those it would corrupt.
Be Vigilant Always be aware of the risk posed by those who seek to reveal these ancient secrets, no matter their intent. Dissuade them if possible, mislead them if you can, destroy them if you must.
Contain the Threat If dangerous and ancient magic threatens the world, you must do everything in your power to contain it.

Oath of Secrets Spells
You gain oath spells at the paladin level listed.

Bind the Unliving
You can use your Channel Divinity to interfere with the magic that animates the unliving. As an action, you present your holy symbol and each construct or undead within 30 feet of you must make a Wisdom saving throw. On a failed save, the creature is restrained for 1 minute. At the end of its turn, the restrained creature may attempt to regain control of its form and make another Wisdom saving throw. If it succeeds on the saving throw, the effect ends.

Weapon of Revelations
As an action, you can use your Channel Divinity to cause one weapon you are holding to become imbued with arcane runes and sigils. For 1 minute, whenever you successfully strike a creature you reveal weaknesses in its defenses, granting the next attack roll made against it advantage. Additionally, any illusions active on the creature are ended when it is struck. If the weapon is not already magical, it becomes magical for the duration. You can end this effect on your turn as part of any other action. If you are no longer holding or carrying this weapon, or if you fall unconscious, this effect ends.

Aura of Disruption
Beginning at 7th level, you can disrupt harmful magical effects around you. You and friendly creatures within 10 feet of you have advantage on all saving throws against harmful magical spells, including innate spellcasting, but not including creature abilities that mimic the effects of spells. At 18th level, the range of this aura increases to 30 feet.

Truesight
Beginning at 15th level, you may cast true seeing without the need for spell components and without expending any spell slots, but with a range of Self. You can see in normal and magical darkness, see invisible creatures and objects, automatically detect visual illusions and succeed on saving throws against them, notice secret doors hidden by magic, and perceive the original form of a shapechanger or a creature that is transformed by magic. Further, you can see into the Ethereal Plane up to 120 feet. Once you use this ability, you may not use it again until you have completed a long rest.

Bastion of Sanctuary
At 20th level, you can use an action to become a bastion of sanctuary. Glowing runes and sigils float and spin around your body and you become an anchor against dangerous magic. For 1 minute, you become the center of an antimagic field, as per the spell. However, magical effects cast by you, created by your abilities, or originating from a magical item in your possession, are not suppressed by this ability.